A slick UI, beautiful hardware, and a consistent experience and ecosystem across computers, tablets, and phones.

Don’t get me wrong – Apple has beautiful products that fly off the shelves, and an ecosystem that’s thriving and that people are comfortable with. But it’s not ubiquitous. My MacBook and my iPhone, outside of some simple contact syncing, are two totally different and separate experiences. This is partly due to iTunes being a horrible nightmare of unpredictability – but even beyond that, I’ve never felt that OS X and iOS are one unified platform They’re two platforms that work together, kind of, for different needs. Honestly the most seamless experience I have between them is Chrome auto-syncing my settings and bookmarks. 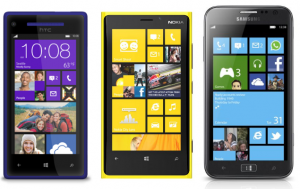 On the other hand, the Windows 8 platform offers a (seemingly) consistent experience across desktops, laptops, tablets, and phones. That’s huge, especially when you remember that most people have a Windows machine as their main computer. Giving those people that level of integration, plus the device sexiness they’ve coveted for years, all in the Microsoft environment they’re comfortable with – that’s a recipe for printing gold.

And don’t forget about the Xbox. You know, that box that is used more for media consumption than gaming? It’s also included in that Windows 8 platform, which means you’re also syncing your living room. I’m going to do a separate article about why I think Microsoft is poised to win the war for the living room, but this broad integration is going to be very appealing to consumers, especially since it’s based on products they already have. Hell, 4 million upgrades and counting have already sold.

Oh, also, Microsoft hasn’t spent the last decade stomping on throats in the content industry. A certain fruit company has. And the content creators, whose participation is vital to any play for ownership of online media in the living room, have not forgotten.

What’s interesting is that Microsoft has gotten to this point by chasing Apple. Owning the ecosystem and hardware has paid off big for Apple, with control translating into consistency and quality. They even took a page from Apple’s OS history: Windows 8 is OS X, a break from legacy burdens into the modern age. It’ll irk some users, as did OS X, but they’ll get over it and be better for it.

But what Apple hasn’t yet been able to do is tie its devices together into a platform. Sure, they were able to drive adoption of iPhones and iPads – Apple leads the US smartphone market with a 31% share. But most of those users still have Windows computers, and the iOS-Windows “synergy” is laughable at best. Apple left the door open, Microsoft walked through.

Apple, of course, isn’t taking this lying down. This week has seen a shakeup in the executive ranks – I won’t go into it here because it’s being discussed to death elsewhere. Ars Technica does a nice job of wrapping up most of the news surrounding the departures of Forstall and Browett – for overall reaction, go to any news site, and look for the headline “What This Means for Apple.”

Know what it means for Apple’s organization? Synergy. Look at how things are laid out in the new order: Jony Ive heads all design, Eddy Cue owns services, and Craig Federighi has operating systems (iOS and OS X). Know what distinctions you don’t see here? That’s right – devices. The guy that’s responsible for iOS running on a phone is now the same guy responsible for OS X running on a Mac. Couple that with Dan Riccio (the former head of iPad) running all hardware, and I see this as being a concerted effort to unify the brand.

Bottom line: we’re at a point where we expect our data to be pervasive. My computing experience should be the same regardless of what device I happen to be using at any given time.

One company is offering that. And it ain’t Apple.