Despite my less than glowing reaction to BitTorrent Live, I’ve been really excited to see peer-to-peer distribution being used for legitimate tasks. From Eve Online’s client updates to beating Justin Timberlake on iTunes (albeit briefly), BitTorrent Inc. is showing that the peer-to-peer protocol can move past its pirate persona.

That push continued yesterday with the public alpha of BitTorrent Sync. Basically, it’s Dropbox without Dropbox: there’s no central server, no monthly fee, and your computers securely sync data directly between each other. There are options for read-only and one-time sharing, and they’re already expanding to support some NAS devices and have mobile in the works. Not connected to the Internet? No problem – Sync can operate on a closed LAN too.

I tried out Sync, as I have a near-constant need to sync files across many machines. Guess what: it works. 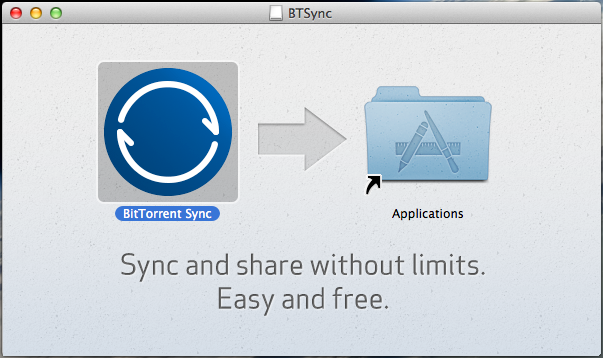 Installing the software is easy: download it here. Windows has an installer – Mac is simpler, as you can see above.

After the install, you get a little tour of Sync. 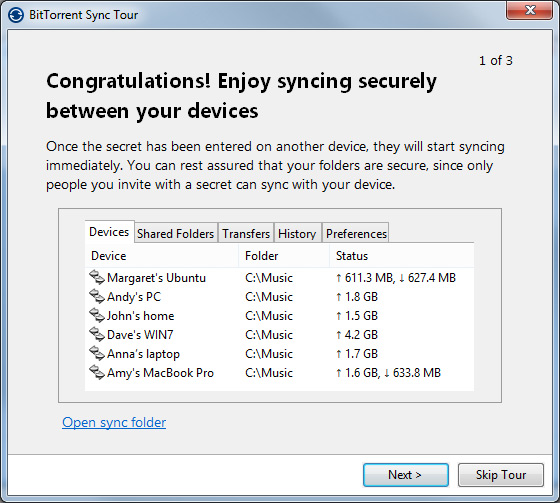 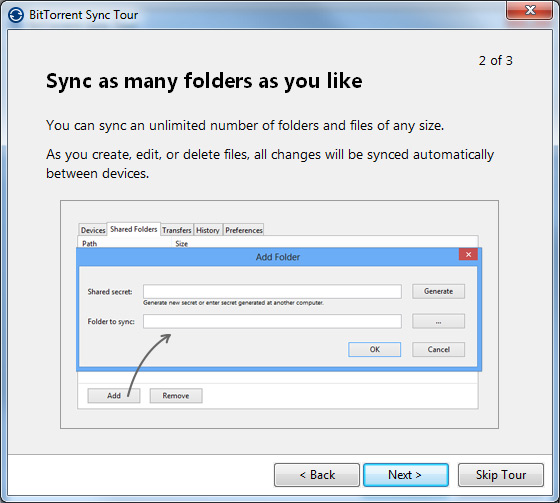 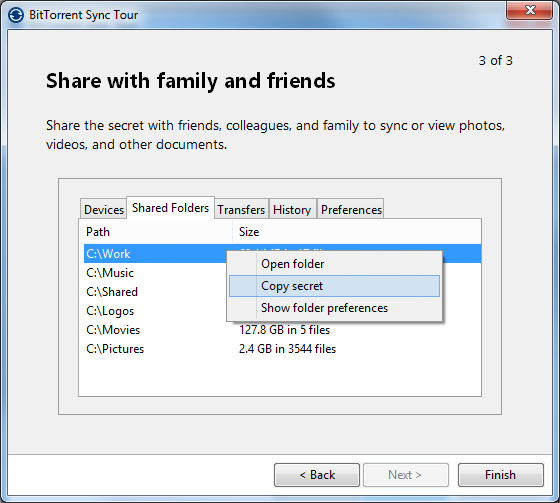 I installed Sync on two computers; I feel like that’s the minimum number you need for a good folder syncing experience. One’s a Win7 machine, the other my MacBook Air. I was very happy to see that the PC couldn’t see any of the Mac hidden files that sometimes show up when sharing files cross-platform (looking at you, .DS_Store).

Beyond that, the process was incredibly simple. I generated a secret during installation on the PC and entered it during installation on the Mac. This linked a folder on the PC with a folder on the Mac – even though the folders had different names and locations on their respective filesystems. On each system’s Devices tab of the Sync client, you can see connected clients; if one goes offline, it drops off the list. 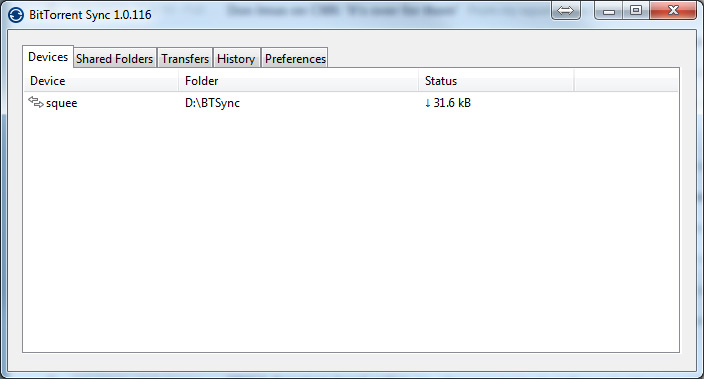 Syncing was very fast, even though my machines were not on the same LAN. New files were picked up in 10-15 seconds, and I saw no issues despite a concerted effort at moving, renaming, and deleting to confuse the software. I did have an issue syncing between work and home; further testing today indicates that my home firewall is to blame, so I’ll have to deal with that. (Edit: turns out it’s just a bug, I have to restart Sync every time I change networks or it can’t find the other devices) But when the machines could see each other, the syncing happened seamlessly, and didn’t appear to impact my ability to work. 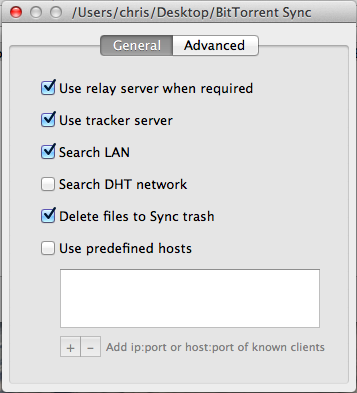 There are also some nice folder-specific options, my favorite of which being Use predefined hosts. With this option turned on, you can manually specify the addresses of hosts that should be part of this folder’s sync process. This makes your sync process completely self-sufficient: as long as you’ve got a path to the hosts (and the addresses are right), the syncing should continue without any network searching/polling/etc.

But this is the Internet, so I need to complain about some things.

My first problem – if it can be called a problem – stems from being a hilariously irresponsible hoarder of digital data. My freshman year Flash project? I still have every source file, in 3 different versions. So my problem with BitTorrent Sync is that there’s now no barrier to syncing everything I have across all systems. I already own all the drive space – may as well use it, right?

While that sounds great, it would also mean constant uploading and downloading, which could put a damper on my watching of movies about Moon Nazis. I’d love to see some kind of scheduled throttling option in Sync, similar to what’s available in traditional BitTorrent clients – limiting bandwidth used during hours I’m around, and opening the floodgates during hours I’m not. There is a Pause Syncing option though, which is nice, but I want more because America.

But seriously, that’s a minor problem at best, in software that’s technically still in Alpha. Beyond that, I’d also love to see a tie-in to something like Amazon’s S3 or Glacier. And obviously I can’t wait for mobile support, which has been announced as in development.

Honestly, there’s really not a ton more to say – it seems to work quite well. I’ll be playing with some of the more advanced  features soon; I’m very interested in the possibility of using this in the background to cross-sync individual edit stations on location. But for now I’ll just keep syncing my cat pictures.