First, the disclaimer: none of these details have been officially announced or confirmed by Matrox. The only official info we have is this image: 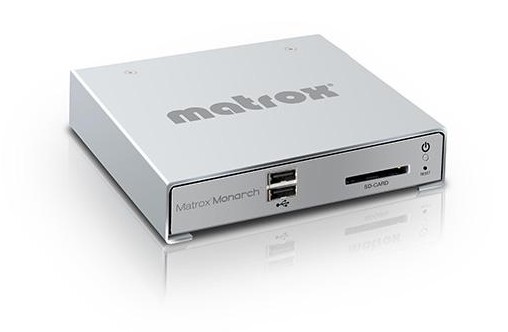 And this blurb from the press release:

This small easy-to-use device is configurable via a simple HTML interface using any computer on the same network as the device. It generates an RTP-, UDP-, or RTSP-compliant H.264 stream from any full resolution HDMI input while simultaneously recording high-quality MP4 or MOV files to an SD card, a USB 2.0 flash drive or hard disk, or network storage.

However, I have a bunch MORE specs because I am magic and can see the future:

How do I know all these unannounced specs? Because at InfoComm, Matrox announced their Maevex Series of H.264 video-over-IP distribution devices. Here’s what the two units look like: 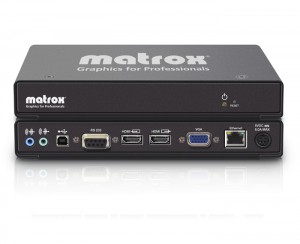 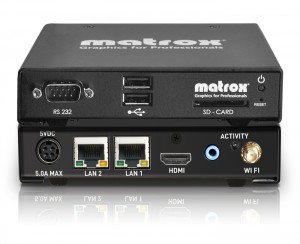 If not, scroll up, look for the silver thing that looks almost exactly like these black things.

Obviously these are individual encoder/decoder units – but the tech is the same, they were announced at roughly the same time, and they even look the same. There’s no way that the Maevex and Monarch don’t share the same (or similar) tech. Most damning evidence: they both begin with M.

My big surprise is the 1/8″ audio. If that’s also on the Monarch, that opens up the option of an external mixer, which opens up options for multi-person commentary, better quality mic audio, and the insertion of hilarious sound effects.

Obviously we won’t know for sure until Matrox actually announces some things, but I’m pretty convinced by the argument I just made. And if it’s all true, this thing is going to be awesome for streaming and recording gameplay.

Welcome to the Video Grandpa Podcast! Every week, Ty Root and I will be discussing what we care about in the worlds of tech, video production, gaming, and beer. We’ll be bringing on special guests and probably swearing a lot.

On June 12th, in response to pro users’ anger at the ongoing lack of a significant Mac Pro update, Tim cook told us “something really great” is coming in 2013