On June 12th, in response to pro users’ anger at the ongoing lack of a significant Mac Pro update, Tim cook told us “something really great” is coming in 2013 for pro Mac users.

Remember the last “something really great” Apple promised the pro community? It turned out to be a half-product that removed features that most of us relied upon to make a living.

Now, I’ve been an Apple user for years, used Final Cut Pro professionally from version 1 until X, and continue to use my early 2008 Mac Pro for all my sound and music work. I haven’t completely lost faith in Apple’s commitment to the professional user. But I do think that their focus has shifted, which will have a substantial impact on any new product they bring to market. I’ve been thinking a lot lately about what shape that will take; I’ve finally got it. 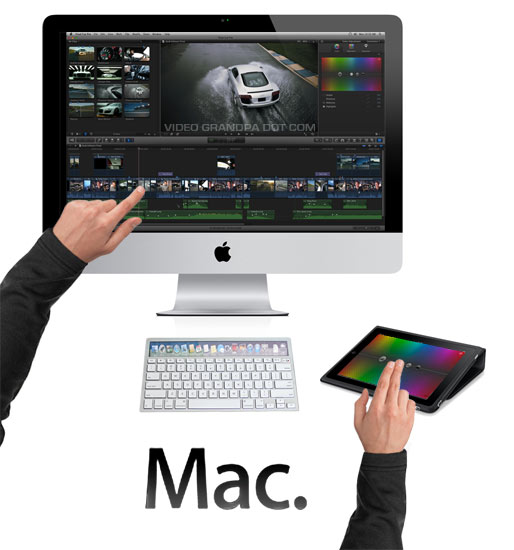 Yes, it’s an iMac. But that’s not what it’ll be called anymore. It probably won’t even be called the Mac Pro X. It’ll just be Mac, or something similar – equal parts elegant and pretentious.

Apple strives to sell a small number of simple products that appeal to everyone.  Don’t sell 20 models that cover 100% of peoples’ needs – sell two that cover 95%. That’s where the money is, that’s why their consumer products have been insanely popular, and that’s why they won’t have three models of desktop computer when two will do.

And realistically, there’s very little that the current Mac Pro design delivers that the iMac can’t – or at least, nothing that you can’t add on through Thunderbolt. Add a second GigE port and you’re basically there.

****The Retina display has merged with multi-touch and gestural control to create a revolutionary new way for creative professionals to interact with their content. Hands-on, if you will. Zoom with a pinch while adjusting color with a swipe – if anybody can make touchscreen computing simple and usable, Apple can.

Oh, also, they’ve filed patents on pretty touch-centric UI and the head of the whole hardware division was moved up from iPad.

OK, maybe the full touchscreen is a bit much. But I don’t think it’s out of the question. And a desktop Retina display in 2013 is all but guaranteed.

Apple has gone multi-touch in a huge way on every one of their products except for the Mac Pro. 2013 will change that, with touch control getting a much more seamless integration with both the system and Apple’s pro software. At the very least, we’ll see iPad as a control surface – you’ll be able to extend your desktop onto it wirelessly, bring up custom touch-optimized controls, and do all kinds of swipes and stretches that will revolutionize how you edit your short film about lost love.

But I could also see a touch-sensitive new design of the keyboard itself. Apple’s controls are about simplicity and subtlety, so a keyboard that incorporates touch input fits. Maybe even something as crazy as an all-touch input panel, where you could page through standard keyboard, alternate video editing keyboard, custom macros for your favorite software, and iTunes playback controls.

Any Screen, Any Time

Airplay Mirroring will expand to allow application-specific use, like playing a FCP timeline on your TV. It will also power some of those iPad control examples I talked about earlier.

The target is the same as FCP X – the people commonly referred to as “prosumers,” who are generally consumers with professional-level desires and aspirations. In recent years, prosumer has expanded, and now can also refer to professionals who utilize lower-priced gear. What it boils down to is usually one person shooting, editing, coloring, mixing sound, and creating graphics.

Modern-day Apple has shown time and again that they’re not interested in serving the needs of large-scale media production. Remember when you could build a Mac-based production infrastructure with Xserves and XRAIDS, using XSan to support multi-user fiber-based workflows?

Yeah, that’s all gone. The margins were too low and the support expectations of professional users too high.

Prosumers come with none of that. Their needs are significantly simpler, partly because they can’t afford the equipment or workflows that lead to complicated needs. Their support expectations are essentially non-existent; this is the group that was secretly pirating Final Cut Pro, so they’re very used to having no one to call.

And most important: there are a LOT of them, with more joining up (read: buying a DSLR) every day.

So that’s what we’ve got to look forward to: a high-end all-in-one that does innovative things, but at the expense of customizability. 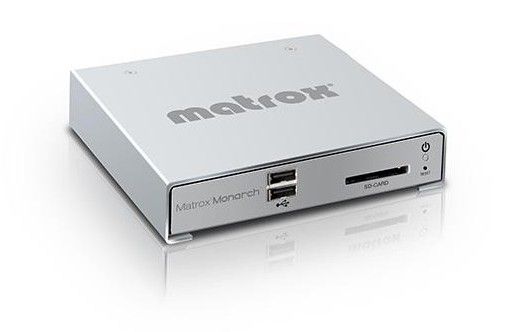 First, the disclaimer: none of these details have been officially announced or confirmed by Matrox. The only official info we have is this image: And this blurb from the press

The Matrox Monarch is the product that every video pro needs, but doesn’t exist – that is, until Q1 2013, when Matrox will start selling it to us. But I