I’ve updated the $500 Podcast Studio store to better reflect the options available currently. You’ll notice that it’s a bit over $500 – at the time of this writing, this is the lowest I can spec without getting into gear that’ll cause you more problems than it’s worth. 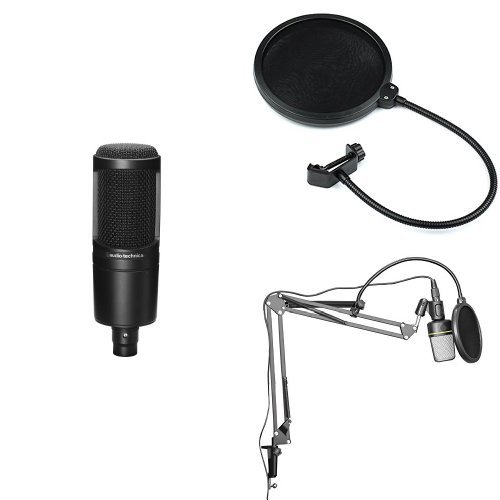 Amazon has the AT2020 microphone, plus stand and pop filter, for $99. You’re going to be very hard pressed to find a better value out there. This is a mic I’ve recommended for years – great sound on a budget. And unlike a lot of “budget” mics, it’s one that you’ll still want to keep around even if you get better mics down the road. 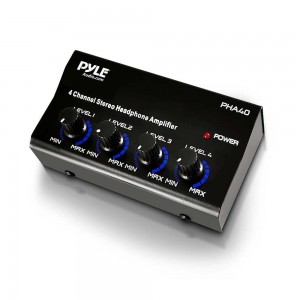 Again, I need to assume you already have headphones of some kind. Headphones are way outside of scope on this budget. But you’ll need a headphone amp if you want everyone to be able to listen to the mic feeds. This one should be fine – it’s cheap and has 4 outputs. You’ll also need some adapters if your headphones aren’t pro (ie, if they have a small plug) and a cable to connect interface to amp. This is optional – you can always just have one person listen on headphones directly out of the interface.

There’s no stand-alone recording solution that’ll fit into a $500 budget, so we’ll assume you have a computer that you can use to record. But to do that, you’ll need an interface and some software.

The Behringer UMC404HD will let you record each mic to a separate track, greatly increasing the flexibility you have in mixing. And that’s really important, because let’s be real – if you’re reading this you’re probably not an amazing recording engineer. There’s going to be stuff in your recordings that needs fixing, and individual tracks will give you the flexibility to do so.

For the software, there are a few options with different feature sets and price points. I feel like there isn’t a “right one,” especially since you may already have something like Garage Band. So here’s a quick list of the ones that don’t suck.

Budget podcasters tend to use Audacity – it’s free. The problem is that if you want to record more than 2 tracks at once using a semi-pro interface (like we do), you need to custom compile in ASIO support yourself. That sounds sucky even to me, and I’ve compiled stuff before. So while free is great, I feel like the ability to record isolated is vital, and recommending something that can’t do that without you compiling it is messed up.

There’s also Pro Tools First, a free version of Pro Tools, the industry standard in audio production software. PT First has some weird caveats – your projects are limited to 1GB, you can only save 3 at a time, and they’re all saved on Avid’s servers. So I hesitate to recommend it. But if you’re serious about one day maybe stepping up to the big leagues of audio production, learning PT First will probably translate the best.

Reaper is $60 – I’ve never used it. But it comes up a lot and a lot of people seem to like it. Luckily it has a 60 day full-featured demo.

Cubase Elements is $99 – Video Grandpa uses its big brother, Cubase Pro. I love it, but for strictly podcast production, I’m not sure I can say it’s any better than the other options. There’s a 30 day demo if you’re interested.

And obviously if you’re Mac, there’s GarageBand. This is another one that gets a lot of use, but since I don’t personally use it, it’s hard to recommend.

Bottom line, I’d say try some stuff out and see what you like. If you already own something, obviously try that first. 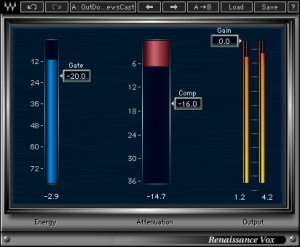 Learn how to use effects. Seriously. A well mixed podcast will probably at least use a compressor and a noise gate, as well as EQ and maybe even some noise reduction.

Some of the software I listed above has some of these effects built-in. But Waves makes a fantastic, easy-to-use compressor/noise gate combo that I’ve been using for maybe 10 years. It’s called Renaissance Vox (pictured above), and as of this writing it’s $47. But I’ve seen it as low as $29 – Waves is constantly running sales.

If you only buy one plugin for podcast mixing, buy this one.

Adding the headphone amp, cable, and adapters gets you to $611.96 and now everyone’s on headphones.

And adding in Renaissance Vox gets you to $658.96. While that’s over budget by a decent amount, this is the bare minimum setup I’d feel confident recommending for a pro-sounding end product. But since I’m not you, it ain’t my call.

Apparently Premiere Pro 2015.3 drops support for some video cards, which they now consider “legacy.” Some of the info is behind a LinkedIn members-only group, so I’m reposting 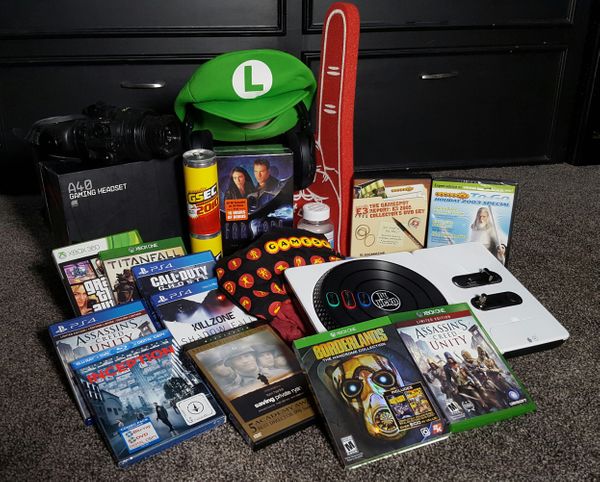 It’s time! In honor of our 100ish podcast episode, we’re giving away a box of random stuff we grabbed from around our houses and offices. This includes (but